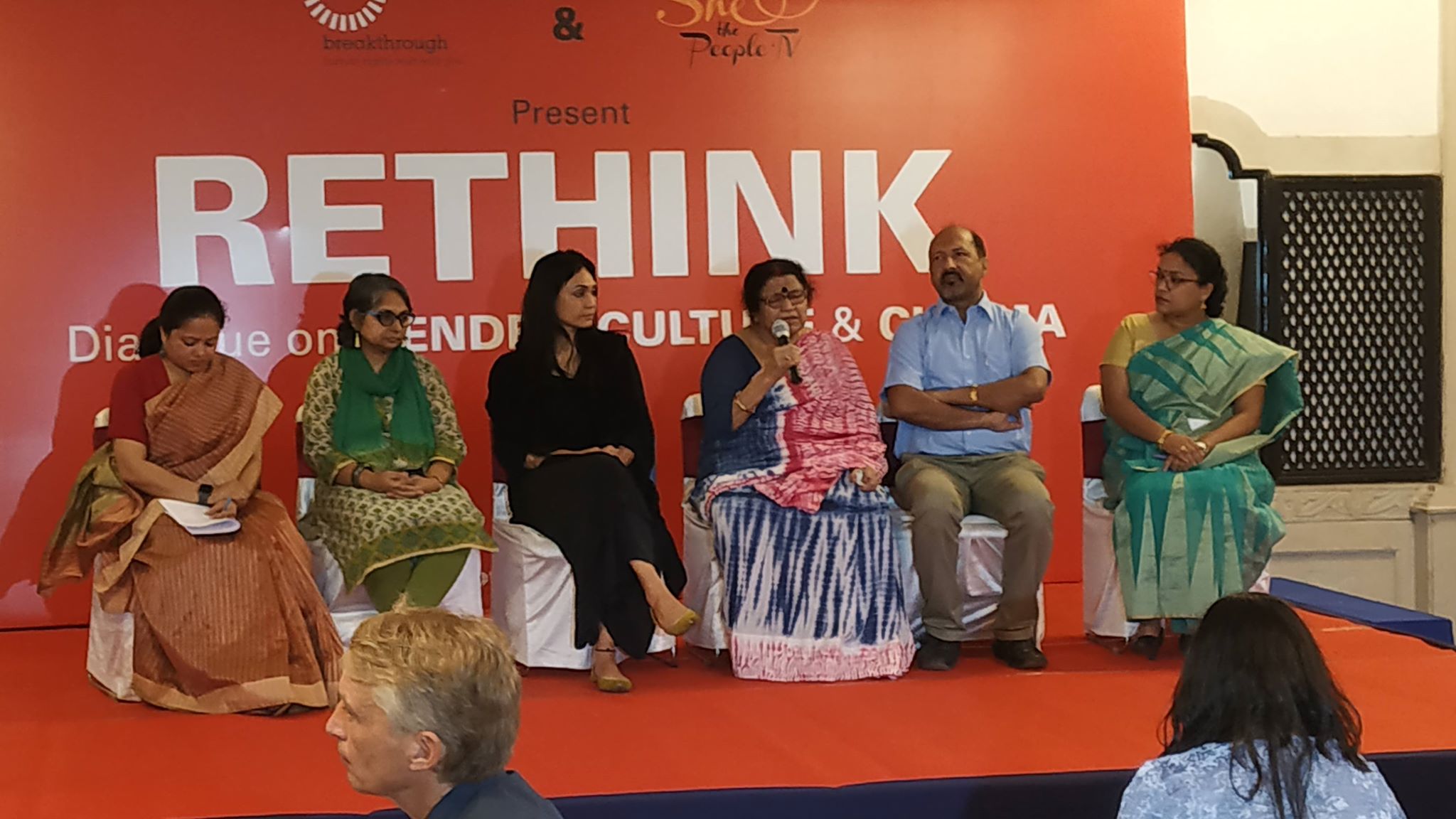 Rethink- a dialogue on Gender, Culture and Cinema, held in Patna on 24th August, 2018 by ‘Breakthrough’ and ‘She the people’  at Hotel Chanakya, featured some sublime speakers, compelling ideas and insightful talks.

The theme revolved around the condition of women in society and their portrayal in Bhojpuri cinema. The platform invited contemporary writers, social activists, Bhojpuri film-maker and film critics to share their innovative ideas to address the common narrative of Patriarchy.

There were various speakers to address the topics divided into three brief sessions of an hour each. First of all Sohini Bhattacharya started the session and did the basic context setting of the theme. The main objective behind the dialogue was to make society rethink about issues faced by women due to patriarchy by using art forms like cinema, theatre and powerful writings.

A case video about a girl from a village of Jharkhand, who wants to study and do not want to get married so early, was shown in the very beginning. The girl in the video says “I am Rashmi, Matric pass” whenever someone greets her, even though she was in lesser grade. The responses to this statement she gets in her locality were so generic like “you’re watching big dreams, you’ll get married soon” and “In villages when girls get older they don’t study further they get married”. Drowned in disappointment she goes to her father who assures her that she should not worry and she’ll get to study further. The intention was to make the audience understand the very idea behind the event.

The first session of Rethink moderated by Pauline Gomes was based on the question:

“Why communities don’t want to invest in girls, when the organizations and government are keen to?”

“I’m 100% Bihari and I know about issues in Bihar because of constant reading. Our society is directly proportional to politics, if we could be able to attract the Political will, the change will visible for sure. We as a society are still stuck at one major point – PATRIARCHY. Patriarchy is so deep rooted that even women don’t abstain to practise it. Our society is not open for casual relationships yet. If young couples fly and get caught their feathers would be chopped off. Let girls grow instead of putting barriers on them. We have to provide them security to make them fearless. I’ve seen Dalits being more open minded. Different people or girls particularly have different set of skills whether they reside in town or a village and we have to nurture it so that they can flourish.”

Second speaker was Dr. Sunita Menon  who contributed her thoughts as,

“Our society’s definition of a complete family consists of boy child. Without having a boy, the family is never to be considered complete. In rural areas of Rajasthan they name their girls as “Antim” which means last so that they could have a boy child next time and this girl would be the last one, that much ignorance our society has for girls. We, in this closed room, can debate a lot about how patriarchy is bad for women in the society but our society considers this very normal. Patriarchy has affected women’s lives in various ways like they don’t get recognition for their products, they don’t even have the ownership of their own earnings. They are taken as burdens which automatically labels girls as a liability, and liability justifies the concept behind dowry. If a father is transferring his liability to man who’s going to be the husband then the Father must pay dowry to him. Girl’s sexuality is related to their honour and they are treated as the weaker one. Yes these are very deep rooted norms and cannot be easily changed but it’s also not impossible. We’ve seen social evils like sati getting terminated by discussions and social movements. We need to work on different levels like individual level, family level, institutional level and community level. We also need to create a socio-ecological model. We can give girls a sense of authority since their adolescence and invest more and more in their education.”

Then came Anindo Banerjee who insisted that lack of education in parents and girl children both are the main reasons for it. And it’s not like people do not want their wards to get educated, they do but due to scarcity of resources and poor education facilities they have to give up. He also shared interesting statistics like 63% of girls who appear for class 10th examination, could not take admissions in 11th standard. He focused on having a comprehensive public policy and increasing resources so that it can be beneficial for more people. 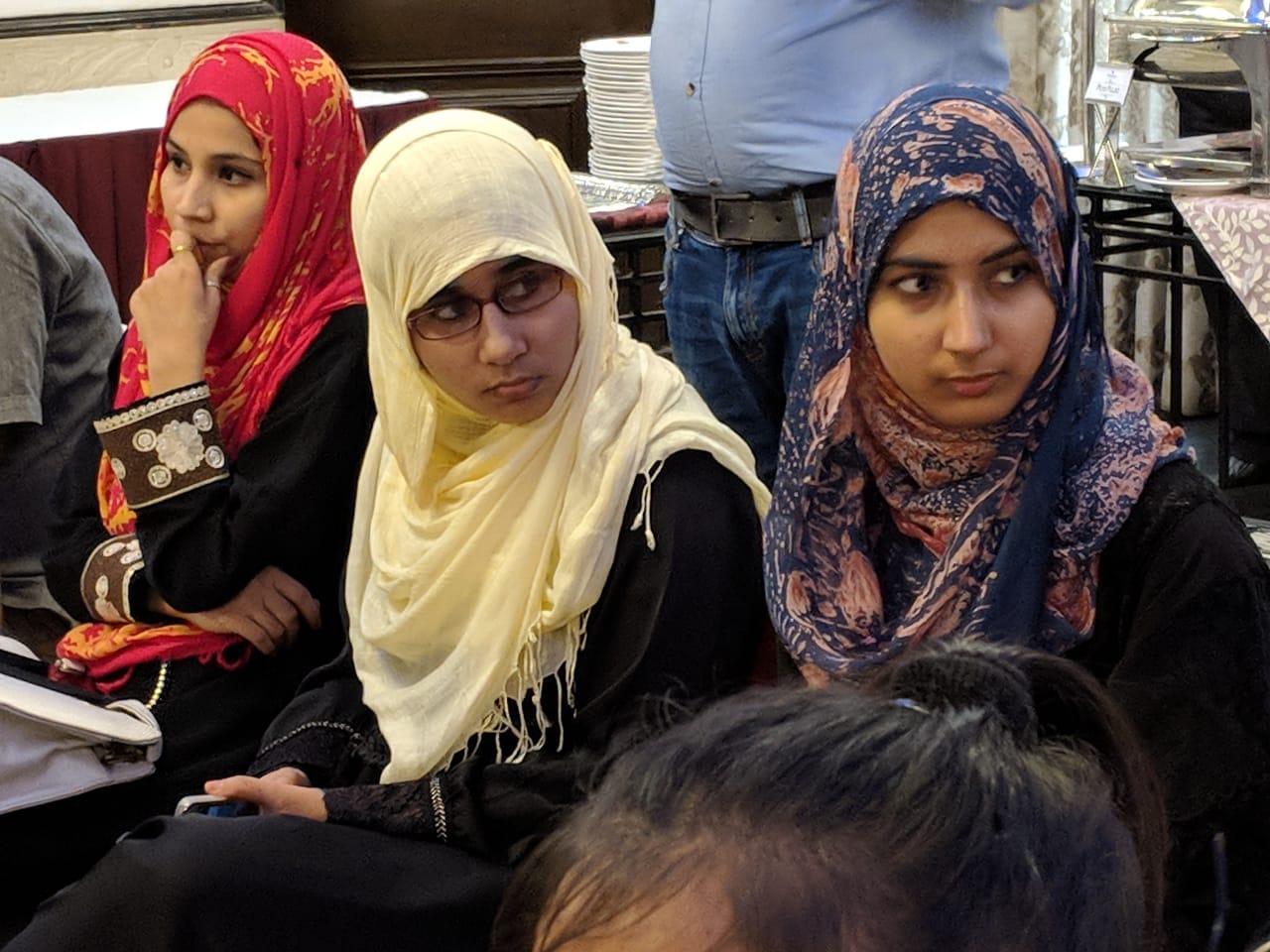 Supreet K Singh was the next panelist to answer.

“There is a huge difference between the number of sexual harassment cases which actually happens and number of those cases being reported. There are so many factors which are barriers in registering those cases like people being less educated about law and order, fear of society and insensitiveness of police officers towards this cases. If these cases are not being registered they’re completely becoming invisible and how will you solve a problem is that’s not visible to you?”

She also said that instead of telling girls what not to do, why not teaching our boys how to behave?

The last panellist of this session was Mona Sinha. She showed an optimistic view towards this issue. She said that yes there are a lot of problems but they’re being discussed and there is a commendable improvement. As Anindo Banerjee, she also said that scarcity of resources lead to hurdles in education. We need to invest more in education so that the resistance of parents could be lowered. The quality of education and infrastructure is so poor that they can’t even attract children towards them.

“We need to provide public platforms to women so that they can share their problems. The women has internalised the victim mentality which needs to be fixed urgently. By internalising this mentality we’re only contributing to patriarchy and nothing else” , said Mona Sinha.

The second session of Rethink moderated by Nayana Choudhary was based on the question:

“What if the minimum age bar of girls’ marriage is raised to 21 for girls?” 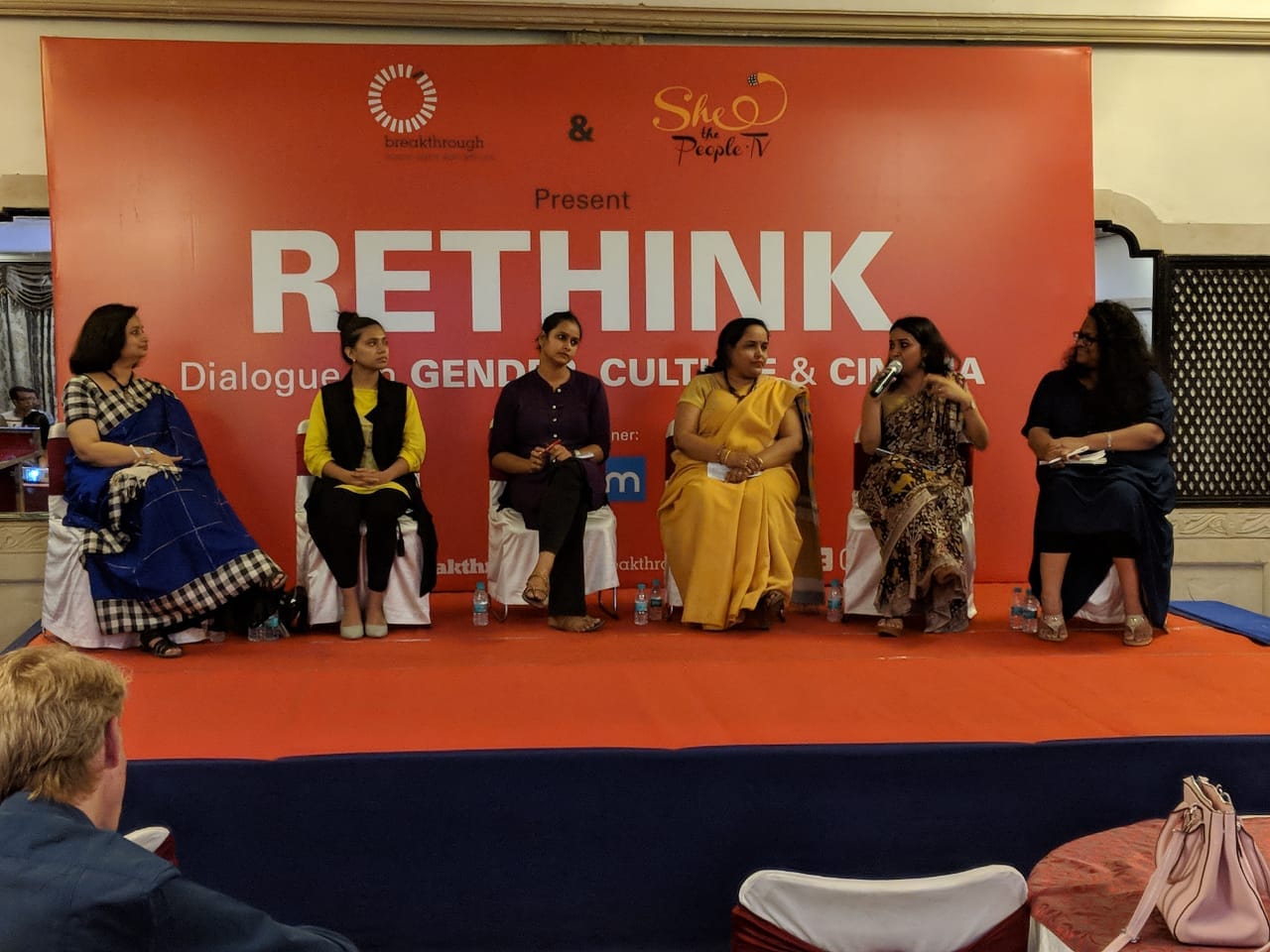 Dr. Urvashi Kaushik became the first panelist to answer and she started by telling that how in USA there is no minimum age bar but still they successfully managed to delay the marriage age by their own consent.

“Indian law is weird because it has different age bar for boys and girls and there is absolutely no logical answer to why” , said Urvashi Kaushik

The second panelist to contribute in discussion was Vandita Moraka.

“Changing laws won’t bring much changes to ground level but at least it will create a fear in common people’s mind so that they’ll think twice before even thinking of marrying their girls off before age as society considers marriage as a goal for girls”,  said Vandita Moraka

The third panelist to answer was Ankita Surbhi who called this age bar thing very futuristic. She said we can’t even fix our basic issues like reproductive and menstrual health so how can we think of such decision which is way ahead of our time. We need massive shift in ideas and mentality to make things better. If that happens then we would not have to compare ourselves with the developed countries. 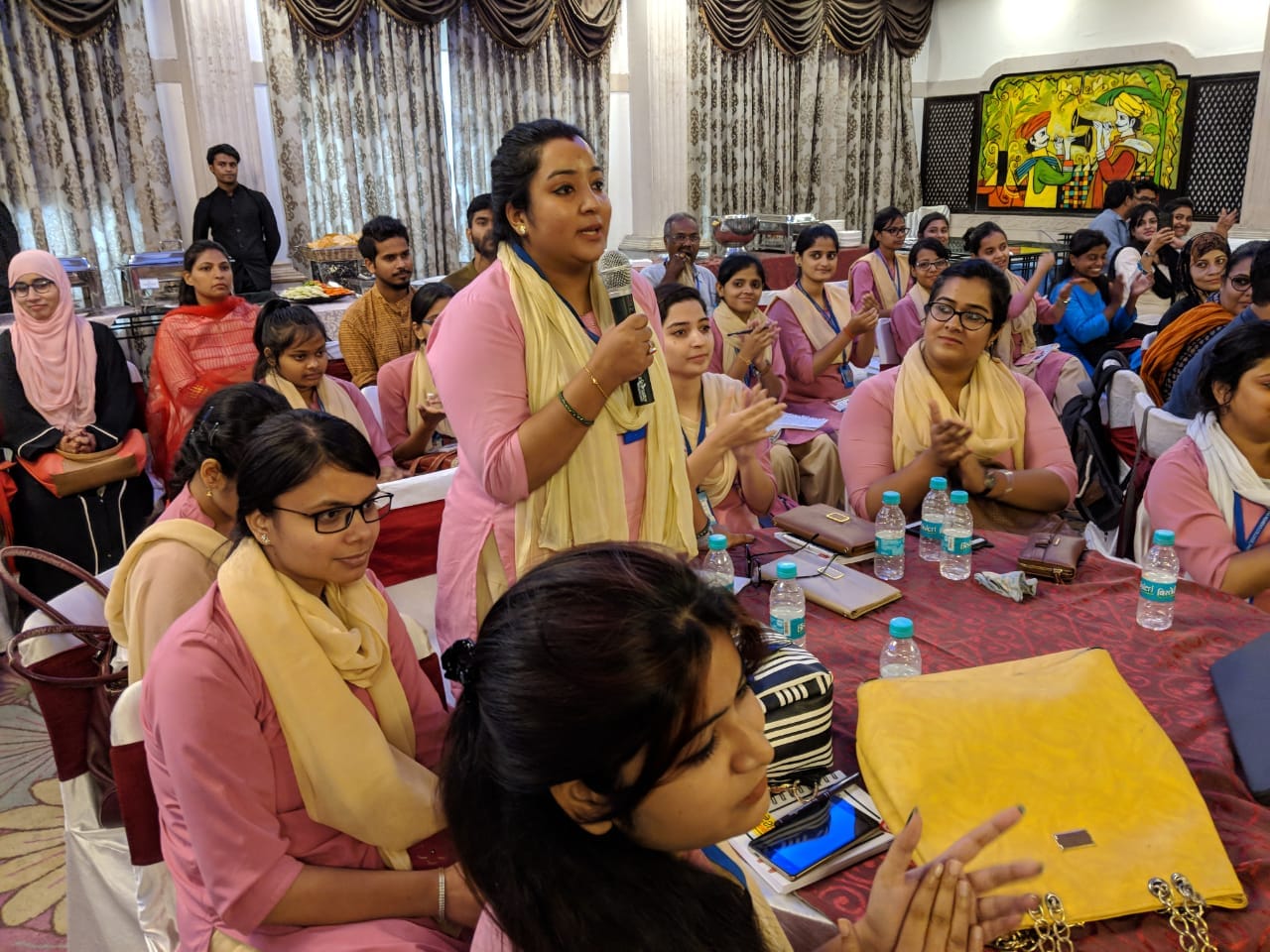 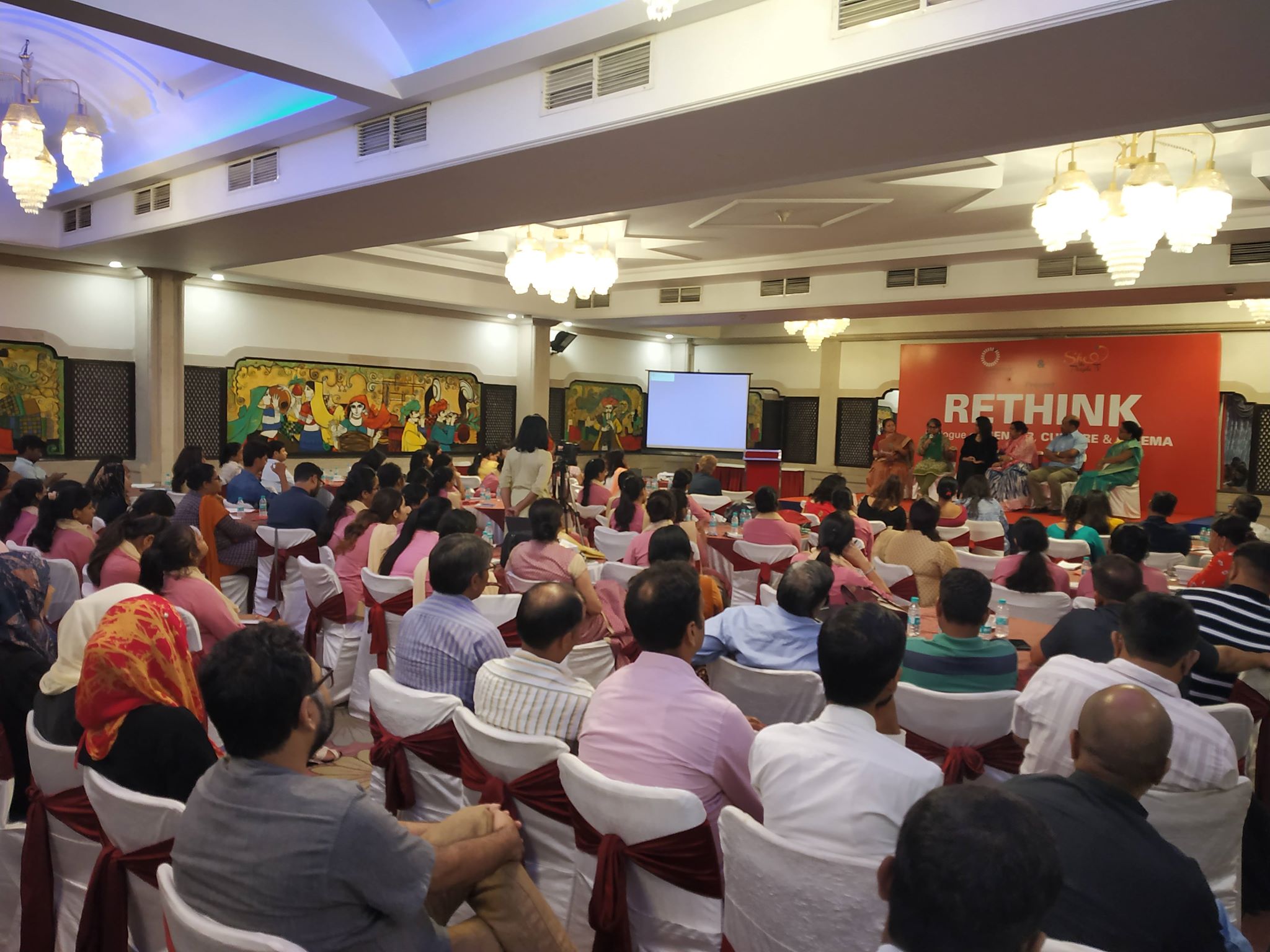 Fourth panelist was Apurva Vivek whose work was recently in headlines as she was one of the people who were behind the TISS (TATA Institute of Social Sciences) report which exposed Muzaffarpur shelter home case of Bihar. She said that we can find the roots of Patriarchy behind this different age group theory of boy and girl in India.

“If the husband is elder than her wife then he will be respected by his wife automatically.” She put question on why marriage is necessary. She talked about disintegration of marriage institution and how famous poet Amrita Pritam lived with her lover for 40 years without marriage.

Last panelist of the session was Dr. Leena Sushant who advocated for girls’ aspirations in her answer.

“If we look over sexual harassment cases in developed countries, we find the conditions same as us but still their girls are way ahead of us”,  said Dr. Leena Sushant

After the lunch, the 3rd and last session of the dialogue moderated by Priyanka Kher started which was based on the topic, “portrayal of women in Bhojpuri cinema: is there a need to shift the narrative?” 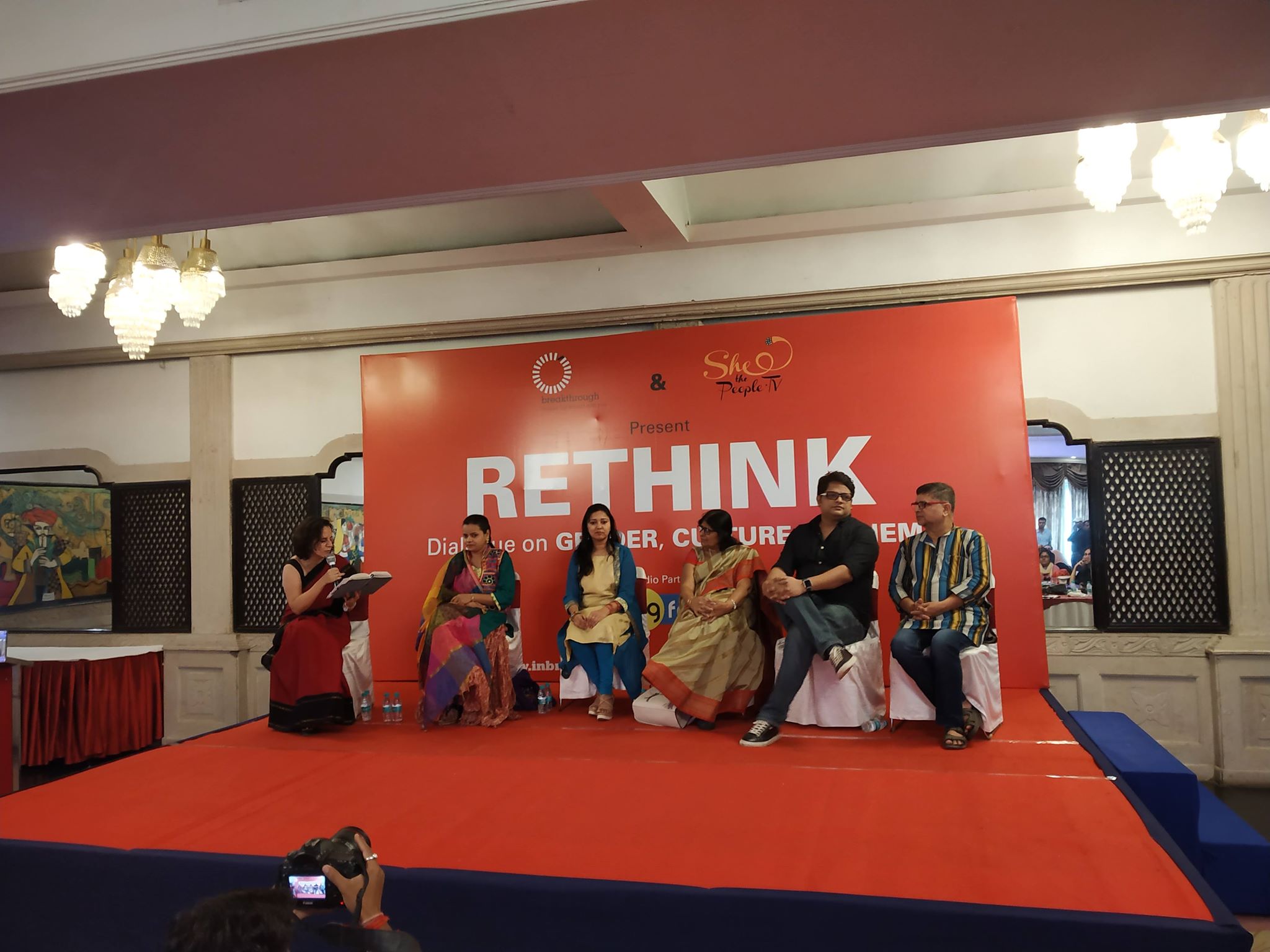 The first panelist to initiate the session was Shefalika Verma. She talked about the good old days of Bhojpuri Cinema when movies like “Piywa Toke Piyri Chadhaibo” glorified the Bhojpuri Film Scenario. But after 80s all that glory was shattered into pieces.

“Contemporary Bhojpuri film directors have completely forgotten sensitivity. They don’t know what actual Bhojpuri society is so they cannot portray the actual image of the society.”,   said  Shefalika Verma

The next panelist to speak on the topic was Vinod Anupam. He also said similar things like the audience haven’t seen original Bhojpur yet.

“Cinema is in pressure of national acceptance. Filmmakers are targeting pan India and that’s why instead of showing the real regional touch of Bhojpur they’re showing what national market demands and that’s the main reason behind the vulgarity in Bhojpuri cinema.”, said Vinod Anupam

“After 80s, standard of Bhojpuri shattered because of commercialisation of art. Instead of showing Bhojpuri, directors translate all the Hindi words in Bhojpuri by just adding “wa” after it. Public will consume everything offered to them. We should add better Bhojpuri content to the cinema.” 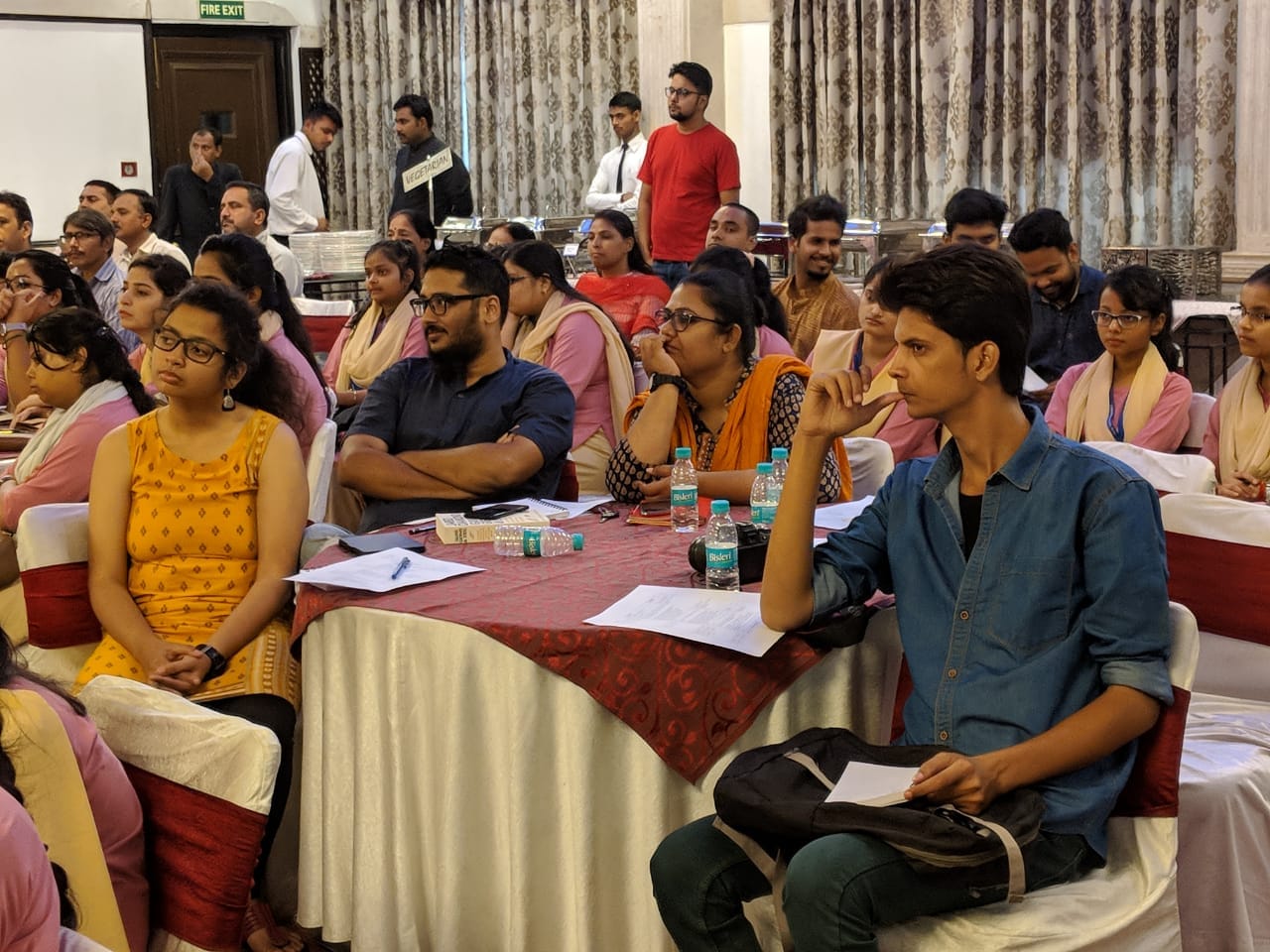 Chandan Tiwari was the fourth panelist to put forward her views. She said,

Film Director Nitin Chandra was the last panelist of the session. He discussed about the importance of language and how because of Hindi we’ve side-lined regional languages and literature like Maithili and Bhojpuri.

“We’ve removed mother from the mother-tongue, now all that’s left is language. So we in Bihar always say like “Bus aa raha hai” and there is a clearly visible patriarchal reason behind it.”

The dialogue ended well with these brilliant speakers’ thoughts and ideas which inspired many to follow the guided path.