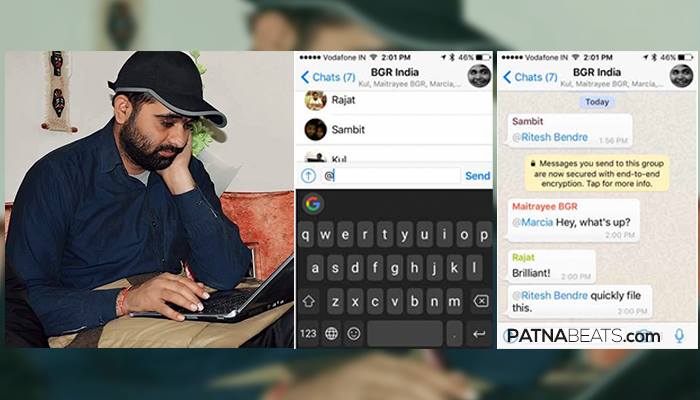 During the last couple of years, WhatsApp has established itself as the best means of instant communication around the globe. Right from the start, WhatsApp has been continuously improving its features to make its platform more interesting. Perhaps, this is the reason which has made WhatsApp the most widely used chatting app.
With the last update, Whatsapp has rolled out a new feature from its closet. I’ll get to what this new feature is all but before that let me just surprise you by talking about the person who might have helped WhatsApp in adding this new feature. No, he is not an engineer working with WhatsApp. He is an Indian. His name is Keshav Jha. He is a Bihari. Mr.Keshav reached out to Whatsapp via mail to discuss about this idea 9 months ago.
WhatsApp has finally enabled the mention feature on its Android as well as iPhone app. The mention feature works same as it does on Facebook and Twitter. Users will have to use “@” sign in a group chat and the app will automatically suggest names of the group members. Notably, the feature is currently limited to group chats only. The mentioned feature was first rumored back in June. 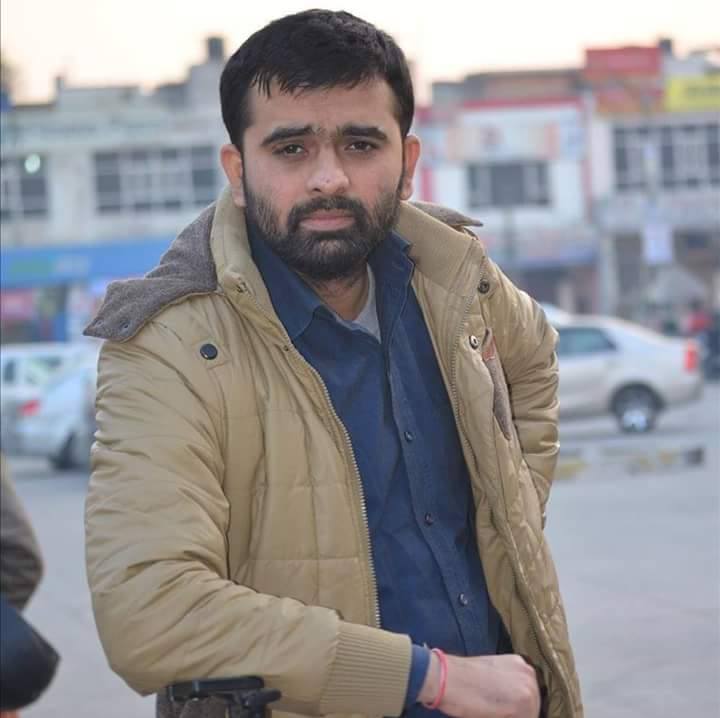 Mr. Keshav is the founder and head of a Faridabad based software firm KBCD INDIA. Based out of Samastipur Bihar, Mr. Keshav felt the need of this feature while going through his group chats on WhatsApp. Due to his busy schedule, it was hard for him to read every message delivered on all the groups. Meanwhile he came to know that in one of the group, he was the center of discussion and he missed it because he had muted the group chat notifications. It was this incident that made him reach out to Whatsapp to discuss a specific notification facility to be provided in WhatsApp so that one can be a part of discussion when that person is mentioned in a chat. Many of us might have thought about this but Mr.Keshav has always been a man of actions and he chose to write to the WhatsApp support team. He explained his point in a very articulated way. He wrote how people often mute their group chats and might miss important stuff or if a certain chat is directed at them. He suggested this with a quoted example that there should be a tagging facility like Twitter or Facebook. If a person uses ‘@’ sign before any name then that person should be notified. He mailed this to WhatsApp support team on 7th December 2015. He got an automated acknowledgement mail as expected. But this was not one of those mails to be ignored and within 36 hours he got another mail from the support team, mentioning that they may not implement his idea immediately but they would consider it. 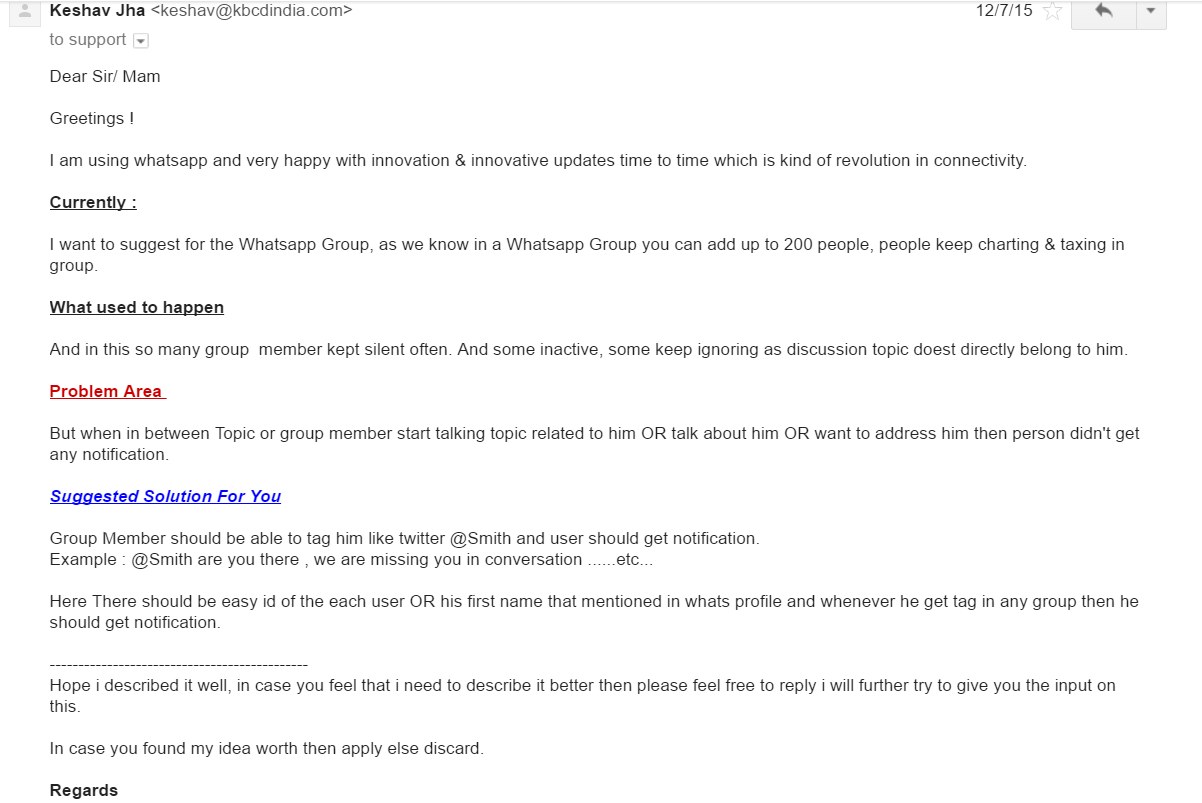 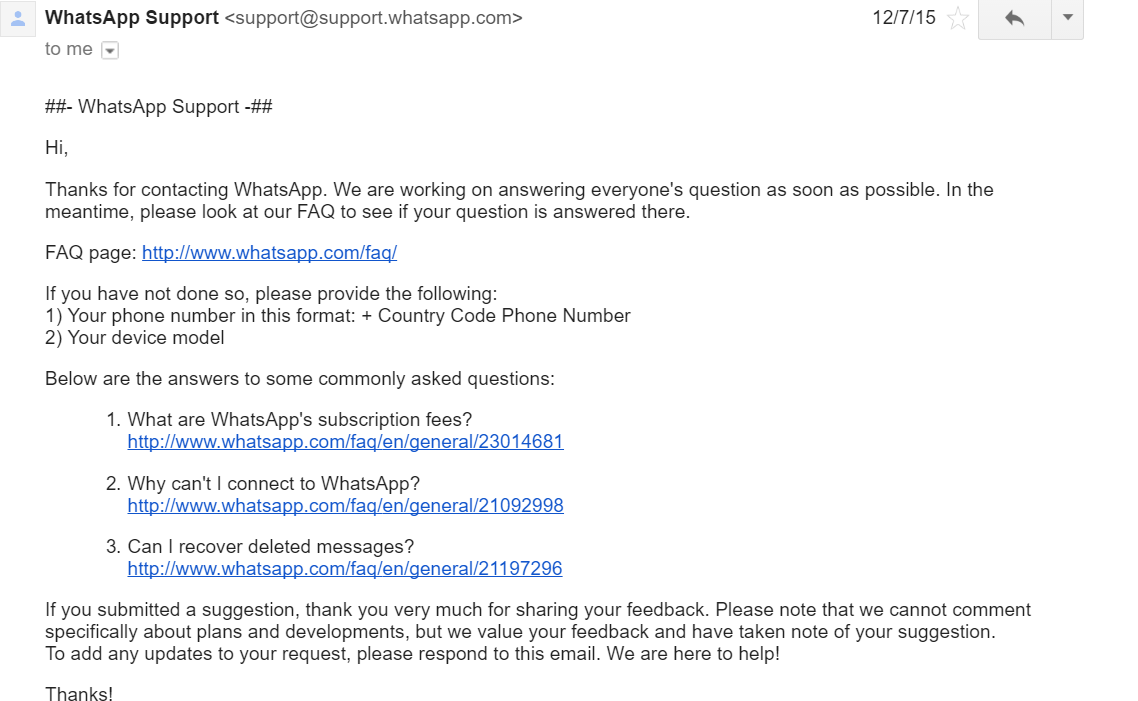 After nine months, WhatsApp has implemented this suggestion exactly in the same manner as explained by Mr. Keshav. In this new feature the app will now let people tag other users within a conversation. If anybody is tagged, they will be notified, even if they have muted their group chat notifications. This feature is apparently intended in a way not to respond to all the messages but at least to the important ones. Although WhatsApp have not released an official statement about getting this idea from Mr. Keshav, but Mr. keshav has all the mail conversation which talks the whole story in a very clear way.
I remember when Bill Gates wrote an article, “Why I am going to India”, before his one of the tours of India. He wrote that “To make a real progress on the problems, you need at least two ingredients; a deep understanding of the problem and the technical ability to solve them”. Mr. Keshav Jha completely characterizes the statement of the great billionaire. Mr. Jha has added his name in the list of golden series of people who have made Bihar a known name in the international domain. We wish him best for his health and life!