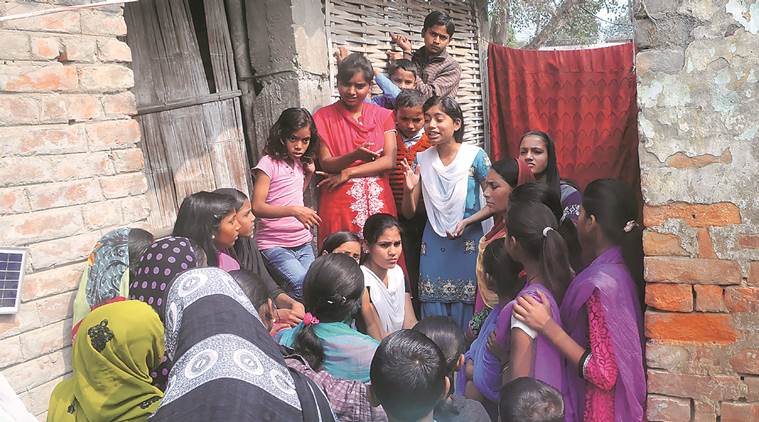 The Bihari sisters say they have been spreading awareness on population control and female foeticide since 2012, with help from Manav Development Foundation, an NGO, and support from their father Mohammed Tasleem, a farmer

“A tender life was hidden inside the womb of the mother… she was crying and praying to God to let her see the world, she wanted to see how beautiful her mother was.”

ARMED WITH lines like these in Urdu, two Bihari sisters have been knocking on doors in Muzaffarpur over the last three years, taking the fight against female foeticide to homes and hearts. Today, Shadia, a 21-year-old economics graduate, and Afreen, an 18-year-old Class 12 student, have become household names in the villages of Minapur.

“You must have heard about Sania Mirza, Saina Nehwal, PT Usha, Kalpana Chawla and role models such as Rani Laxmibai and Razia Sultan. Your daughter could be like one of these,” says Shadia, who recently got a job as an Urdu teacher in a local school.

“Initially, the men discouraged us but later, they saw merit in our argument and allowed us to interact freely with their families,” says Afreen.

“We also speak about the benefits of population control. We say that giving a good education to two children is much better than leaving seven or eight half-educated,” she adds.

Travelling on cycles, carrying a plastic file full of newspaper clippings on the dangers of female foeticide, the sisters say they also use “shock tactics” to get their message across. One of the questions they ask women is: Will you abandon your newborn daughters in dustbins to be eaten by dogs and cats? “The women always say ‘no’ firmly,” says Afreen.

Residents of Khanejadpur, one among 24 Muslim-dominated villages in the Minapur assembly segment, the sisters say they have been spreading awareness on population control and female foeticide since 2012, with help from Manav Development Foundation, an NGO, and support from their father Mohammed Tasleem, a farmer who also runs a provision store.

“My father always encouraged me to study and complete my graduation,” says Shadia, the second of five girls in her family.

“It was Shadia who came up with the idea of starting this campaign after she read about a baby girl being recovered from a dustbin at Sheohar four years ago,” says Tasleem, with a proud smile.

“Shadia shared her feelings with Afreen and they decided to do something about it in their own little way. I asked my daughters to take some time away from studies and move around villages on bicycles.

At times, I accompany them. Now, most people know them and support their cause,” he adds.

Says Mohammed Khalil, a neighbour, “The two have earned our respect for what they are doing. Even if they are not allowed inside some homes, their catchy and inspiring songs draw the women out.”

According to Varun Kumar, secretary, Manav Development Foundation, the NGO decided to tie up with the sisters last year. “We have tried to give direction to their efforts. We have supplemented their campaign by running free tailoring classes for Muslim girls. Shadia and Afreen have offered a portion of their house for the purpose,” said Kumar.

The Bihari sisters have caught the eye of the local administration, too.

“Shadia and Afreen have been doing commendable work in the area. We acknowledge their efforts and are looking for ways to encourage them further. We will also try to engage them in government programmes to give a boost and direction to what they are doing,” says Sanjay Kumar Singh, Block Development Officer, Minapur.

For Tasleem, the “fruit of their efforts” comes in small bundles of joy. “A year ago, my daughters saved a baby girl by educating the mother about female foeticide. That girl was named Jannat, heaven,” he says.