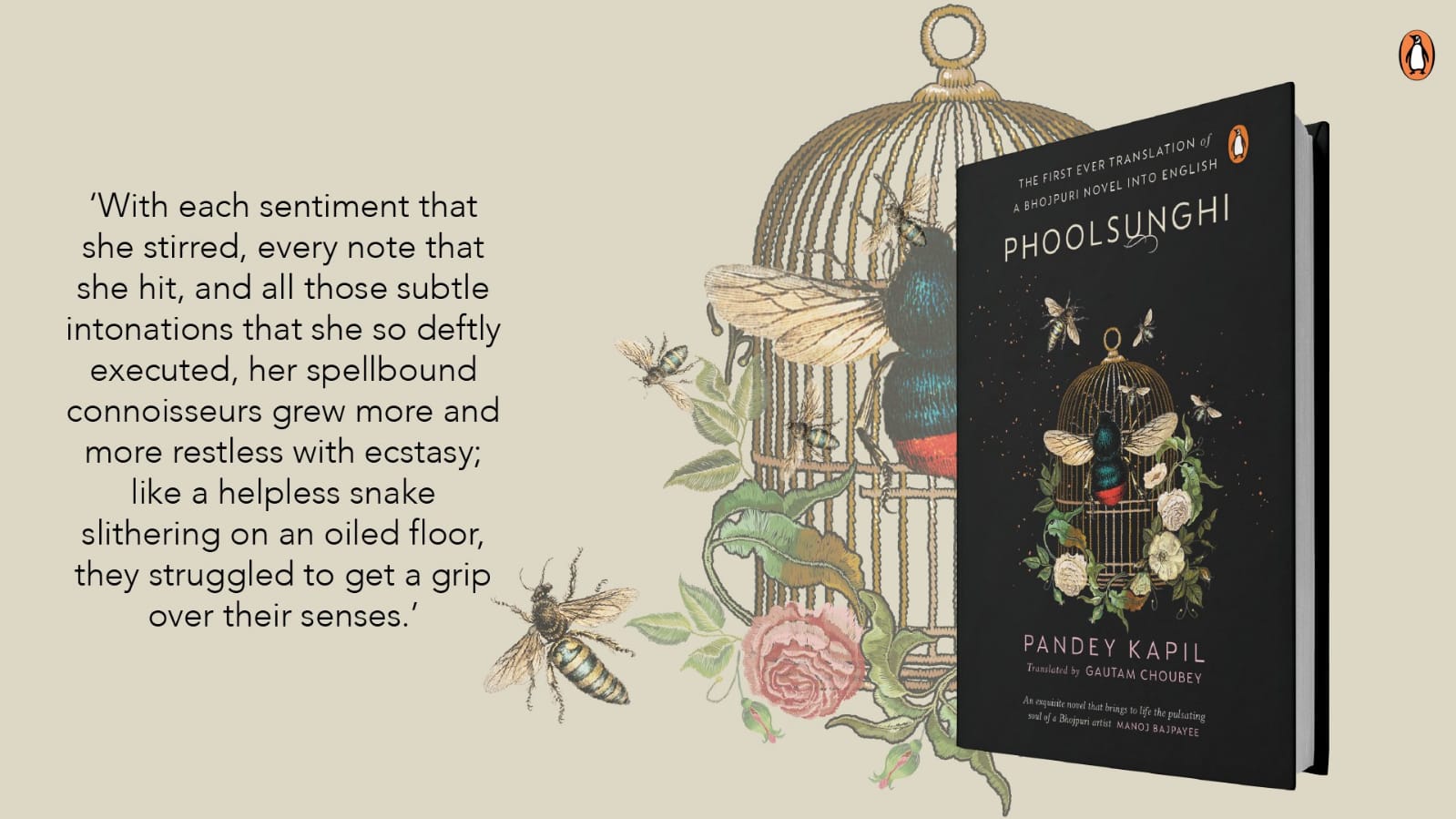 ‘Babu Sahib! You must have heard of a  phoolsunghi— the flowerpecker—yes? It can never be held captive in a cage. It sucks nectar from a flower and then flies on to the next. I come from the community of tawaifs. Members of my community are like a phoolsunghi.

These words were like a dagger plunged into Haliwant Sahay’s heart, to assuage his ego, he traps Dhelabai in a cage called Red Mansion.

As the introduction explains, Poolsunghi is a “tiny bird known for its noisy bustle around flower plants. However, if trapped in a cage, it loses its liveliness and withers away quickly”.

“Phoolsunghi” is amongst the most celebrated works of bhojpuri literature. It is probably the first  bhojpuri novel to be translated into English. Published in  1977, the novel is authored by Pandey Kapil, a veteran writer who renounced his prospects in Hindi literature to take up the cause of Bhojpuri.  Translated into English by Gautam Chowbey, it surpasses language barriers and induces the reader into the world of tawaifs, sahibs, musical maestros and folk songs.

The novel is popularly considered a fictional retelling of the unfulfilled love between popular Folk artist Mahendra Misr and Tawaif Gulzaarbai aka Dhelabai. It goes beyond the tragic love story and speaks of forgiveness, emotional ties, losss, compassion, camaraderie and reconciliation.

Even while being set in the distant past, the book paints a graphic picture of Revelganj and Chhapra  in a way that it doesn’t seem alien to the reader. It is rich in varied interpretations and connotations.

While the major characters are fleshed out, nuanced with subtle interiority, certain characters and their progression seem fast paced and leaves the reader befuddled. Character progression of Rai Lachhman Prasad and Manorma is hurried towards the end. The female characters apart from Dhelabai or Kesarbai lacked depth compared to their male counterparts.

Being action driven with certain dramatic events, Phoolsunghi keeps the reader glued. The economical, smooth and concise writing along with folk songs are the strengths of the novel. However the songs are particularly effective when one reads the original text, English somewhat limits the profound effects of Poorvi songs.

Excelling in its description of characters and their feelings, Pandey Kapil has tried to give each major character and their inner thoughts a space in the novel.

The lack of caste- antagonism, Sahay’s palace is an inclusive space with servants from different religions and castes living harmoniously. The sensitive portrayal of Tawaifs, who are seen as artists and custodians of culture is praise worthy.

In Chowbey’s words “Phoolsunghi, therefore, is a metaphor for free-spirited creatures, striving for survival and meaning beyond their respective cages. It is this desire to rescue a trapped-self that drives most of the action in the novel.“

It is this yearning for rescue and narrow escape from the cage of gender and societal constraints, responsibilities and economical limitations that the youth battles everyday that makes the novel relevant. As Haliwant Sahay advises- ‘Gulzaribai, we are obligated to live our lives. And to discharge this obligation, we are expected to take up daily battles. Those who fail this sacred duty are doomed to die a thousand deaths. This is what Revel Sahib has taught me.’

“Phoolsunghi”, the first bhojpuri novel to be translated into English, envisions a space for the long neglected language, its literature, its distinct worldview and rich culture in the mainstream discourse.