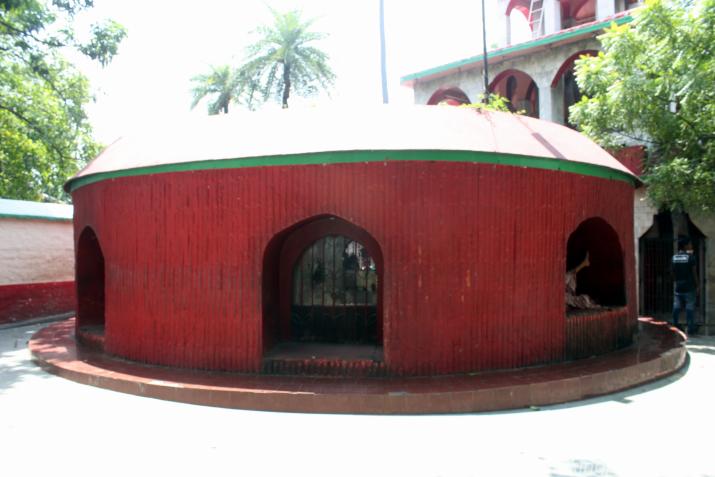 Agam Kuan (unfathomable well) is an ancient well and archaeological site in Patna, India, Bihar. It is said to date back to the period of Mauryan emperor, Ashoka (304–232 BCE). Circular in shape, the well is lined with brick in the upper 13 metres (43 ft) and contains wooden rings in the remaining 19 metres (62 ft). The well was refurbished during the reign of Emperor Akbar and a roofed structure was built around the well. This circular structure has been fitted with eight windows which are well placed

During the 1890s, the British explorer, Laurence Waddell, while exploring the ruins of Pataliputra, identified Agam Kuan as the legendary well built by Ashoka for the purpose of torture before he embraced Buddhism,as part of Ashoka’s Hell chambers. The torture practice was also reported by Chinese travellers (most probably Fa-Hien) of the 5th and 7th centuries A.D.

The well is stated to have been used to torture convicts by throwing them into the fire that used to emanate from the well. Ashoka’s Edict no. VIII makes mention of this well, which was also known as “fiery well” or “hell on earth”. Another popular legend states that this was the well where Ashoka threw 99 of his elder half-brothers after killing them to obtain the throne of the Mauryan Empire.

According to a myth, the well has a subterranean link with the Patala (netherworld) or hell; this was inferred on the basis that a saint found a heavy log in the well which was supposed to have been lost in the sea. Another geo-hydrological link suggested that Agam Kuan is connected to the Ganges river. The site is also connected with several Jain religion legends, the most notable of them being that of a Jain monk, Sudarshana, who, when thrown into the well by a king named Chand, floated to the surface and was found seated on a lotus.

The well was refurbished during the reign of Emperor Akbar and a roofed structure was built around the well. This circular structure has been fitted with eight windows which are well placed.

Visitors throw coins into Agam Kuan, as it is still considered auspicious. It is used for many religious ceremonies, especially Hindu weddings. Although it is venerated, the well waters are not consumed. Offerings of flowers and coins are thrown into the well usually during summer months as the well’s history is linked to “heat and hell”. Dating to Mohammedan rule, the Mughal officials offered coins of gold and silver to Agam Kuan.

In addition to the Agam Kuan, the archaeological site features a temple, as well as several ancient and medieval sculptures. The Shitala Devi temple is adjacent to the well The temple is dedicated to Shitala Devi, which houses the pindas of the Saptamatrikas (the seven mother goddesses). The temple is widely venerated for its belief in curing smallpox and chicken pox, and it is also visited by devotees for wish fulfillment. The temple’s female priest is an uncommon practice.

A statue of Yaksha of the Mauryan art period stands guard outside the temple. It was described earlier by Alexander Cunningham when he visited the site in 1879–80. This artifact is not traceable in the present day