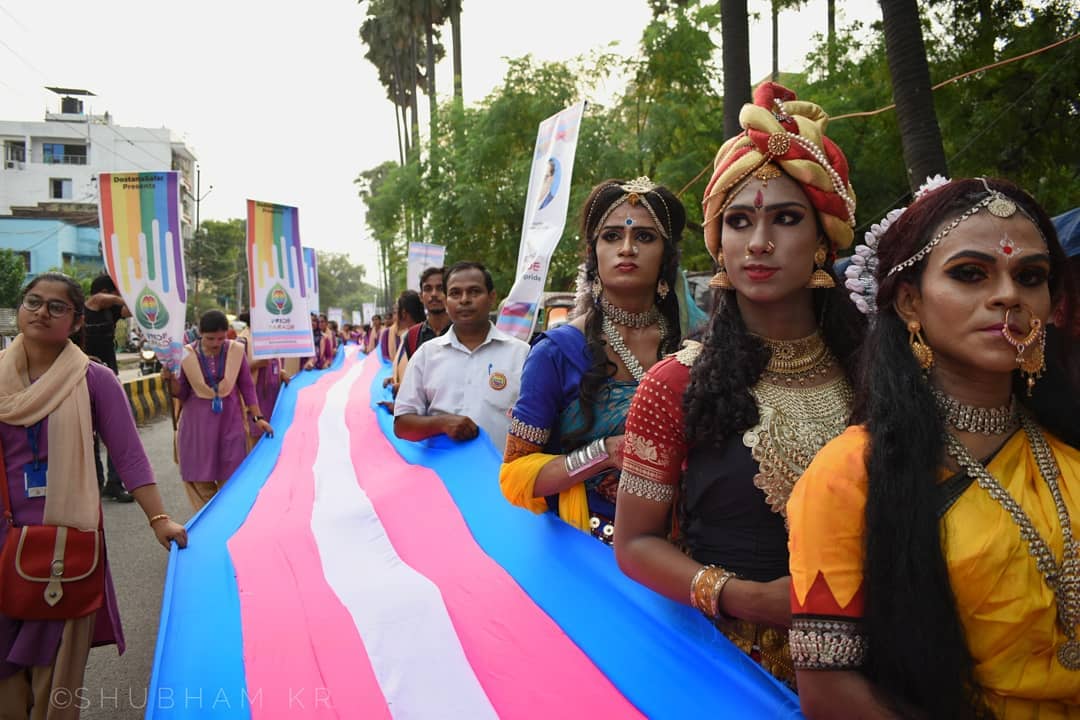 Bihar Pride Parade 2019 is as historic to Patna as 1969’s Stonewall to New York. Walking in the pride alongside people painted in the rainbow, singing the slogans of love, demanding rights from the authorities, dancing in the rhythm of freedom, Patnabeats saw Patna embracing the warmth of acceptance. Some crying with a smile, some dancing with joy.  Old, young, teen, lesbian, gay, transgender, bisexual or straight were all visible tearing city’s street and sparkling rainbow all over our hearts.

Surfing in the waves of love, on 14th July when the world celebrates the International non-binary day, Patna decided to come out of her closet and march alongside the city’s LGBTQ+ community. More than 500 people lifted the World’s largest transgender flag while rallying from the historic Hindi Sahitya Samelan to Rajendra Nagar’s Prem Chandra Rangshala covering 1.8 kilometers of city and a generation of homophobia.

A very excited Pooja who travelled all the way from Manner for the Pride told us that, “Things might not change much right after the pride, but at least people will start thinking about it (Queer Community’s rights) and eventually it will all change for good”.

Carrying a placard saying “Tumse Na Ho payega…. #transbill2019” 17-year-old Tanmay who identify as trans man told us about the flaws in the Transgender Persons (Protection of Rights) Bill, 2019 recently that was passed by the government, he said, “The bill states that one has to go through a District Magistrate to receive a certificate and the DM is allowed to give a certificate approving one’s identity as a trans person. It seems like the government has not even consulted any trans representative before drafting the bill.”

Holding a poster with Baba Saheb Ambedkar’s picture in it, Mehtab told us that, “I ask for the same respect and equal justice for transgenders and queer community that we (a minority community) got after the implementation of Indian constitution.”

“I feel comfortable here, it’s really great to be here,” said Delhi’s Queer activist Ayush who was honoured to be a part of Patna’s Pride. He also requested the discrete and closeted members, who are still figuring and wondering the complications of coming out, “You need to accept yourself, the world you live in will only accept you when you with be able to accept yourself. Come out, scrapping of 377 was just one step we are still fighting for our rights. Come support us!”

After the September 6th judgement of the supreme court, a lot of people thought that all the rights that the Indian queer community stood for are achieved. However, people missed out to see what they are considering as a finishing line is where the race begins for the community. The queer community still can’t marry nor they can parent a child, live as a family, many are still bullied in our classrooms, fear of losing job still pull people down the dark shadow of closet, and many families still believe in taking their own blood to a Baba thinking one’s sexual orientation is a black magic.

Speaking to us, 18 year old Aditya Sagar who was one of the organizers said, “It may be difficult but isn’t hard to organise pride. We are happy, our theme think in pride seems successful as more than 500 people are here today. People were expecting the rise of the community for a long time but they are now accepting it. “

He further added,“I sure this date is going down in the history of Patna as the date of change!”

While others were shouting Love is Love, Aditya added Rights are Rights to it.

The parade was also joined Students from Patna Women’s College and St Xavier’s College of Management and Technology, a female band from Nari Gunjan, members of the environment group Taru Mitra, and a progressive women’s writers group ‘Lekha Manjusha’.

The face of Pride Reshma Prasad who’s Dostana Safar organised the pride was seen jumping all across told PatnaBeats before the pride that she can see people outside the community happily accepting the Queer members as they are coming out but the members inside the community are still hesitant to come out and accept themselves and other. PatnaBeats hope that the pride will definitely help to make our beautiful Bihari community more inclusive and accepting.