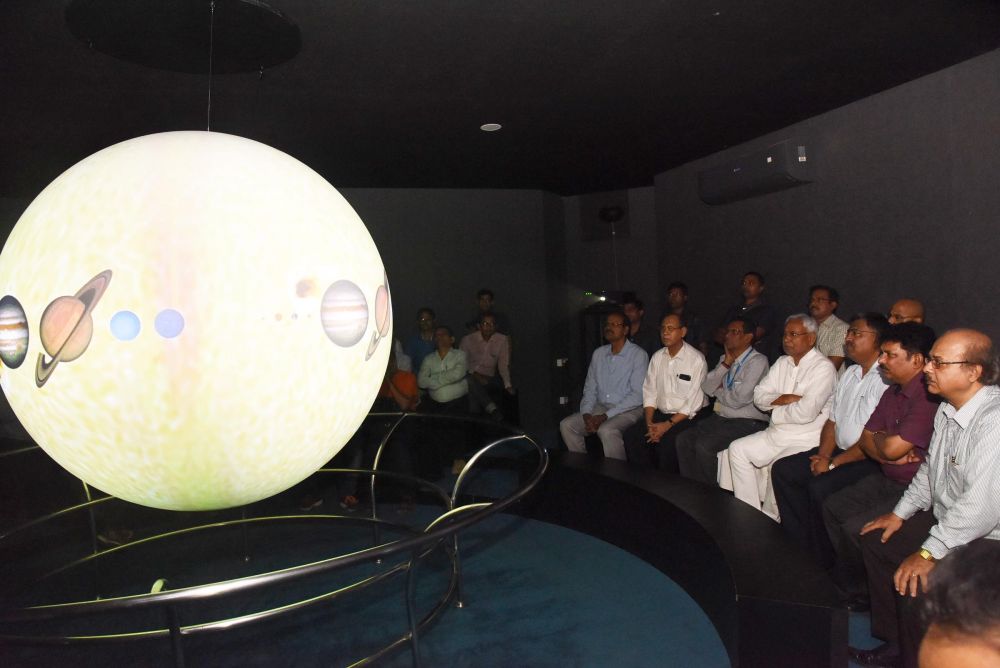 Chief minister Nitish Kumar inaugurated the Science on a Sphere (SoS) facility at Shrikrishna Science Centre near Gandhi Maidan on last Monday.
A small show was organized for the audience present at the launch to brief them about all the planets in the solar system. Centre’s curator Ram Swaroop gave a presentation with the help of projectors to outline various environmental changes due to pollution.

The CM stressed on the need for creating awareness about the environment. “We have increased the green cover in the state from 9% to 15% and the government aims at making it to 17%,” Nitish said. He warned people against wasting drinking water.

The first-of-its-kind facility in Bihar and Jharkhand uses state-of-the-art technology of projecting contents from multiple projectors on a central 1.8m diameter spherical sphere rather than on a flat screen. Four projectors will show a high-resolution seamless video on topics such as atmosphere, ocean, land and astronomy, among others, on the passively suspended sphere. Each of the four projectors is responsible for one quadrant of the spherical screen. The surface of the sphere is fibreglass, coated with paint. Such facility is available in Bengaluru, Kolkata, Nagpur, Guwahati, Mumbai and Delhi science centres.

The Patna facility has 75 seats. “The hardware and Linux-based software has been imported from Germany. As of now, Patna science centre has 1100 datasets (catalogues). We can also download real-time data of different occurrences like tectonic plate movements during an earthquake around the globe. We can download these images within 4-5 hours through satellites of National Aeronautics and Space Administration (Nasa) as well as National Oceanic and Atmospheric Administration (NOAA) orbiting the earth,” curator Ram Swaroop said.

He said the visuals projected on the screen show how Earth would appear from a distance of 12,800 kilometres in space. The data catalogue also includes images of other celestial bodies such as Mars, Mercury and Sun. The aim is to represent global phenomena better. Satellite images of atmospheric storms, climate change and ocean temperature are projected on the sphere which will help explain various environmental processes. This would not only give children a chance to learn more effectively about astronomical, geological and geographical issues concerning our Earth, but would also give them an understanding of the surface of other planets such as Mars as well as rover landings, Swaroop added.
Source: Ayesha Hassan| TNN