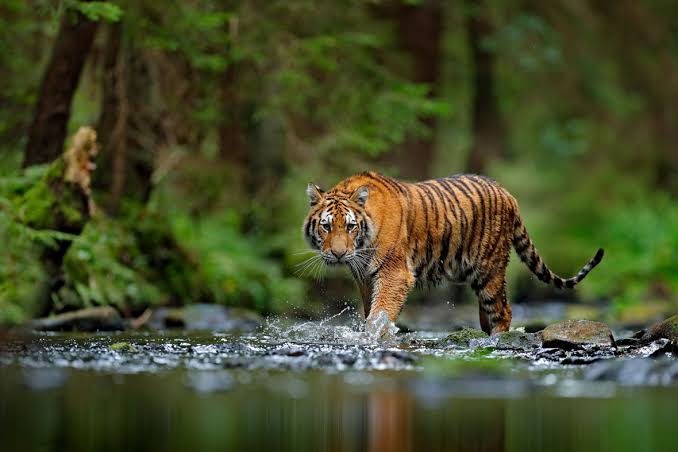 Kaimur’s widespread forest cover best suited the needs of the government to set up another tiger reserve as Valmiki tiger reserve VTR hits the saturation point. The idea was first proposed by the divisional forest officer (DFO) of Kaimur in 2018 after spotting the existence of tigers in the surrounding area.
VTR located in the West Champaran of Bihar and spread across 900 square feet kilometer scripted a successful story of hosting 31 tigers. Much ignored for a long span of time it soon became an enticing visit for many. The popularity grew and so did the big cats. The Sanctuary which had around ten Tigers in 2010 is now home to 31 tigers. The saturation of VTR called for another home for these mighty hunters.
VTR is said to have a capacity to host 50 tigers but according to the latest census, there are already 31 big tigers and 12 cubs which takes it to 43.

The quest for a new place wasn’t very difficult as the forest belt of Kaimur seems like a good option at hand. The Kaimur district is said to have a huge area of around 1139 square kilometers and the highest green cover in Bihar. The area includes the Kaimur Wildlife sanctuaries spread in 986 kilometers.

Also read: Anitha Vinod from Patna shares her experience on how she survived Corona

The Kaimur forest is surrounded by the forests of neighboring States such as Uttar Pradesh, Madhya Pradesh and Jharkhand. Until 1995 tigers were often spotted there. The idea was first proposed by the DFO of Kaimur district Satyajat Kumar, in 2018 keeping the fact in mind that VTR was nearing the saturation point. The proposal of converting Kaimur into a tiger reserve was made after spotting a few fresh kills, dead corpses of deer and pug marks in 2017.
When asked about the advancement of the project Santosh Tiwari, director of the ecology department mentioned that the Divisional forest officer, Vikas Ahlawat is heading the project. He further said,”We have to first work on improving the habitat, from there we have to move to the safety and security of the Tigers in Kaimur. Only after that, we will formerly send a report to the National Tiger Conservation Authority to approve and declare it as a new tiger reserve. It is a long process and is bound to take time”.
The National and once endangered Cat now demands for a new home. We have come a long way but still there’s a long way to go. Humans are slowly yet relentlessly making peace with nature.