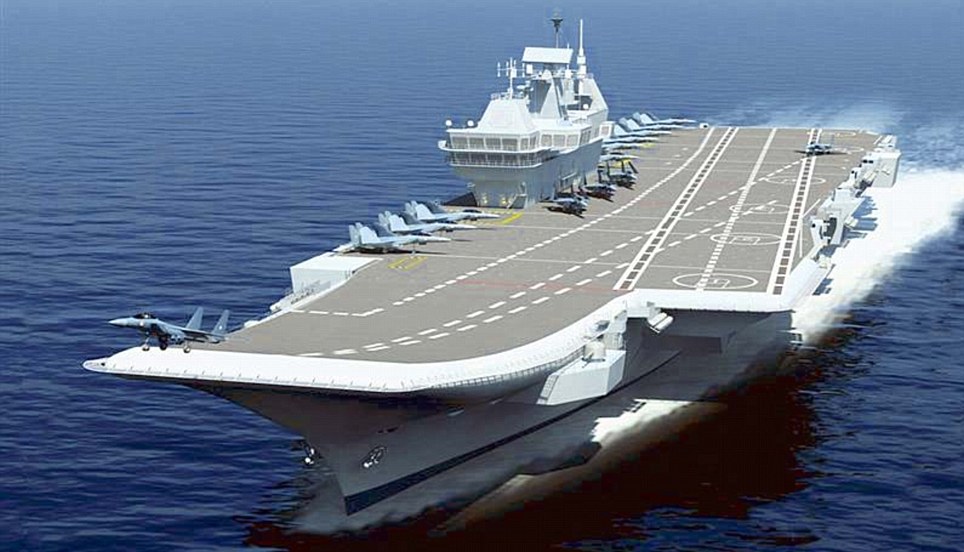 Indian Naval Ship Vikramaditya, the Indian Navy’s largest ship and its sole aircraft carrier was formally affiliated to the Indian Army’s highly-decorated and battle-hardened Bihar Regiment and the Indian Air Force’s No 6 Squadron, that is tasked with maritime strike operations with its Jaguar fighter aircraft.

A glittering ceremony was held onboard INS Vikramaditya at the Karwar Naval Base, nestled amongst the picturesque Western Ghats, attended by Western Naval Command chief Vice Admiral Girish Luthra, and the Army’s Military Secretary Lt General Amarjeet Singh, who is also the Colonel of the Bihar Regiment.

Air Officer Commanding Maritime Air Operations, Air Vice Marshal M Fernandez was the senior officer from the IAF at the event also saw participation by a host of senior officers from all the three services.

The historic affiliation ceremony commenced with an inspection of the Tri-Service Guard of Honour by the senior officers.

Addressing the gathering, Western Fleet commander, Rear Admiral RB Pandit said the idea behind the affiliation was to foster espirit de corps and friendship between the three units that would lead to greater synergy and jointmanship between them and also promote interaction between the personnel and their families.

The formal association between the three units commenced with the reading of the ‘Charter of Affiliation’ which listed its aims and the association that the units were to maintain. The charter was subsequently signed by the commanding officers of the three units and by senior officers from respective services.

This was followed by an exchange of mementoes between the three units.

The event also was an impressive flypast by aircraft of the Fleet Air Arm, led by a formation of Chetak helicopters followed by formation of MiG-29K fighters of the Indian Navy’s 303 Squadron from the Goa-based Naval Air Station, INS Hansa.

“The ‘raison d’etre’ of affiliation between units of fighting forces is to act as a force multiplier by promoting better understanding of each other’s strengths and ultimately serves to maximise the combat potential of the Indian Armed Forces at the time of reckoning. It also fosters a deep understanding of each other’s service ethos, customs, traditions and sharing of new operational concepts and the same is aptly described in the affiliation motto ‘Victory through Jointness’,” an official statement said.

The affiliation involved a host of activities over 17 and 18 January, including a formal dinner, affiliation ceremony and organized visits for the visiting personnel. The event culminated with a grand ‘Barakhana’, a ceremonial dinner which is attended by all ranks together, organised onboard INS Vikramaditya for all the participating personnel.