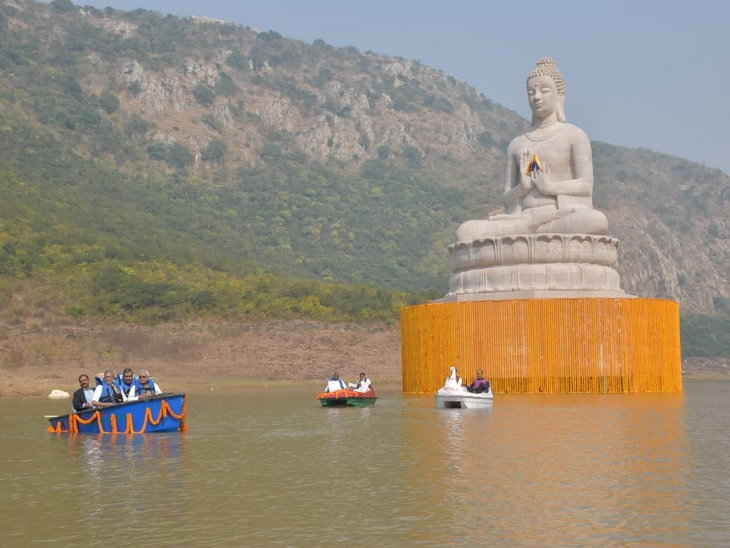 Bihar has got a 70-feet tall statue of Lord Buddha in Rajgir which is considered to be the India’s one of the tallest statue of Buddha in the country. Bihar Chief Minister Nitish Kumar inaugurated the statue at Rajgir in Nalanda district in the presence of Mahabodhi temple’s chief monk Bhante Chalinda amid the chanting of hymns.

The statue has been instated above a 16-metre radius substructure in the middle of the Ghora Katora Jheel and has been made from 45,000 cubic foot pink sandstone brought from Chunar in Uttar Pradesh. The cost of making this gigantic statue is around Rs. 13-crores. Labours and engineers took a total of 547 days for building this statue.

Chief Minister had a boat ride in Ghora Katora Jheel and offered his prayers by moving all the way around the Lord Buddha’s statue. The Ghora Katora Lake is one of the popular picnic spots of Rajgir. The name of this lake suggests a bowl of the horse. The site of this lake is believed to be the place where the stable of Jarasandha was situated. Jarasandha is a famous character from the Hindu mythological epic, Mahabharata.

“Ghora Katora Jheel is a historical place. It is a natural lake surrounded by five hills where Lord Buddha’s statue has been installed. People will visit the lake where they can also have the privilege of offering their prayers to Lord Buddha. A beautiful park is being developed here from a tourism point of view. I am quite confident that Ghora Katora will emerge as an important place for eco-tourism. No petrol and diesel vehicles will be allowed to play here as only electric vehicles will be allowed. People can visit this particular area either on their foot or by using bicycles and tongas.” said Nitish Kumar in the inauguration event of Lord Buddha’s statue. This statue will undoubtedly lead to a rise in the tourism sector of Bihar. People from all around the world are expected to come to Bihar to visit this statue. The government of Bihar is trying to establish Rajgir and Nalanda as a tourist destination and that too on a global level.

This Buddha statue will promote eco-tourism as visitors will be allowed to come only on foot, bicycles, rickshaws, horse-buggies, etc. and battery-operated vehicles to keep the area pristine and without any human-caused pollution.

The Chief Minister, Nitish Kumar later inaugurated a three-day Rajgir Mahotsava in the evening. The Mahotsava will conclude on 27th of November.