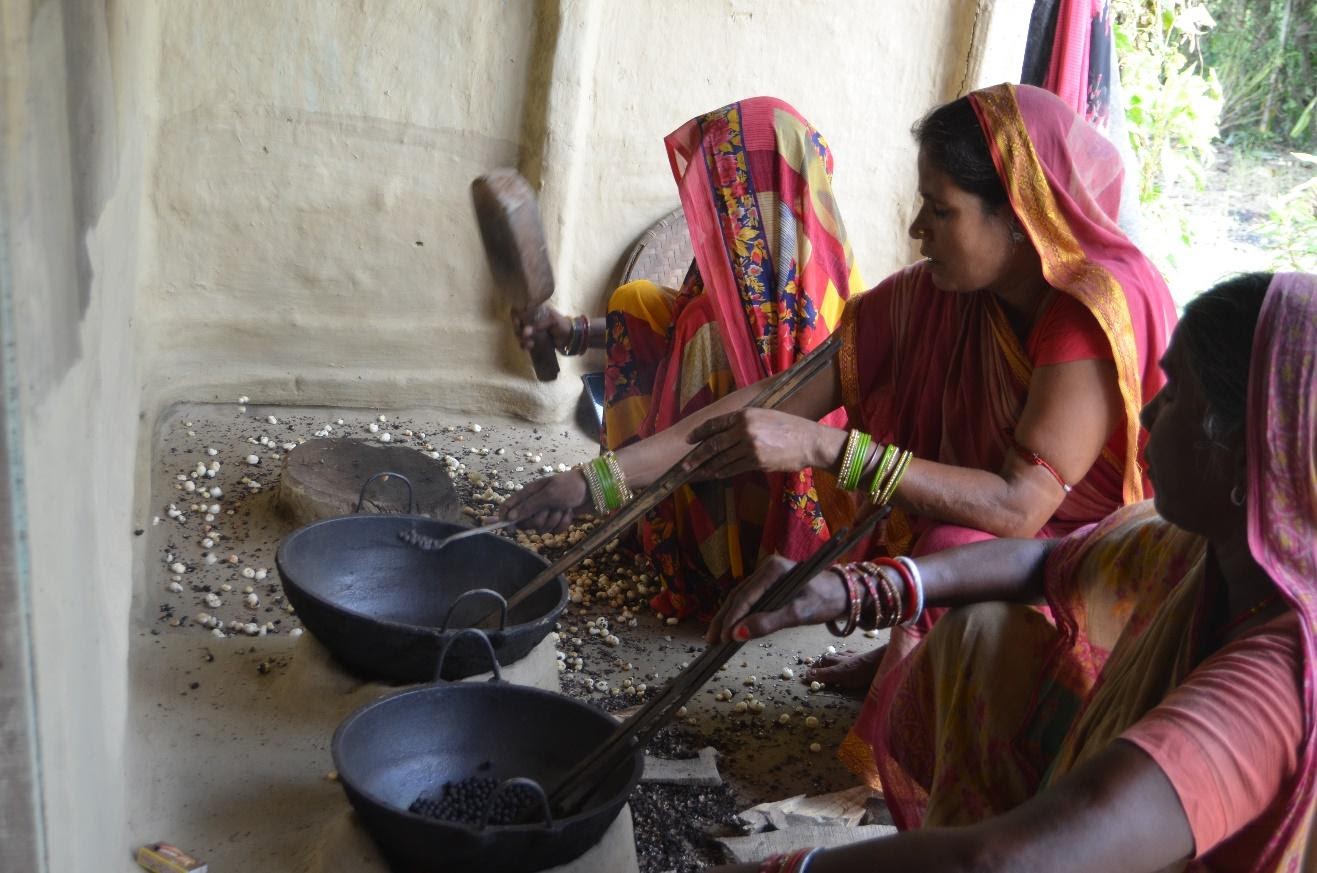 In Bihar’s wetlands of the Mithila region (Madhubani district), the villagers of Usrar village, especially the Mallah communities, are engaged in fisheries. The majority of people from this community do not have large lands or are landless and hence, they generally obtain their food by bataiya system, a local process where sharecropping is done on plots that belong to landlords. The rise in migrant labour, where the men are living in urban areas of Bihar, Delhi and West Bengal and the women of the society are engaged in cultivating land, shows the chronic food insecurity and rising cash demands in the economy. However, amongst all of this, fisheries still remain the main and essential source of income for people here.

In the 1990s, to establish fisheries collectives, the involvement of partner Sakhi Bihar played a very vital role to strengthen their livelihood. Here, the group of women came together and shared the labour, gain and losses in order to lease and stock the village ponds for fisheries. Other than this there is another traditional livelihood amongst the Mallah community which is Makhana production.

Euryale Ferox, also known as prickly water lily or Gorgon plant, is a species found in southern and eastern Asia. The seeds of these prickly water lilies are called Makhana. It is highly nutritious and has a very strong market value in urban areas. Apparently, the regular floods, the high requirements of labourers and the changing interest with the generation are leading towards the decline of Makhana production. The trade is even now influenced by the rich farmers and businessmen of neighbouring districts.

The Sakhi Bihar in an association led by the University of Birmingham established women’s collectives under the Swashakt programme, which seeks to revive the production of Makhana as a business in the Mallah communities and others in Usrar and nearby villages. The people from the Usrar group initiated the production, but most of the groups have long ago left the production. Whereas the groups who had small lands or are landless sharecroppers with male members relocated to different urban places like Delhi or Kolkata for work. The revivation process started from purchasing Makhana seeds to invest in seed production and the ponds they lease. The ponds will be chosen which are safe from floods.

The production of Makhana is highly labour intensive, hence, the collective business is the most suitable. The working hours, investments and profits are equally distributed among the group and the process takes place in different stages.

Makhana is the seeds from the prickly water lily plant. The seeds are sowed in December and reaped in January. It is treated the same as the other seedlings in the nursery. Harvesting is one of the most difficult parts of Makhana farming. It asks for the gathering of seeds from the muck at the pond’s bottom and is harvested in two stages in the month of July and August. There is another considerable option, which is to harvest seeds from lilies plants in submerged fields.

The grading divides the sun-dried seeds into 5-7 grades which are sold at different prices. This is generally done on a size basis by a sieve usually called chalna.

This is the most crucial part of the production process. The seeds are roasted in an earthen or iron pan on wood-burning stoves while stirring them continuously for about 4-6 minutes. The roasting is done at a temperature of 250 degrees to 3000 degrees celsius. Simultaneously the second team pops up the Makhana seeds by pounding. Pounding is done by a pitna or hammer. This stage involves collective labour including 4-5 people for roasting and 3-4 people to pop the Makhana seeds.

The popped up Makhana is then sorted from the waste. After which, it is cleaned to make the Makhana white and the remaining husk from the Makhana is removed. The use of machines in this process can add up to 10-20% value to the Makhana.

Makhana pop is highly profitable. It sells at a price of up to INR 2000 per kg. It can be sold in the local market as well as overseas. Makhana pop has a long shelf life, is lightweight and easy to transport. As time goes the collective will also introduce packaging which will add to the market value of these Makhana pops.

The intention of reviving traditional livelihood products has been successfully achieved by the establishment of women’s collective enterprise which has automatically led to the perseverance of the indigenous occupation and the relevant skills in the Mallah community. The biggest goal for the community in the current winter is to produce makhana seeds so that they don’t have to depend upon the market seeds which are sometimes of very bad quality. They are regularly getting expertise and different help from Makhana research centres at every stage of production to improve the quality of makhana. Their hard work is set to shine even brighter in the coming future as the women of Mithila ain’t looking back any day.

Visit beatskart.com to shop an amazing range of Bihari products!