Gharaunda - The Diwali treasure of the 90s kids
Skip to content 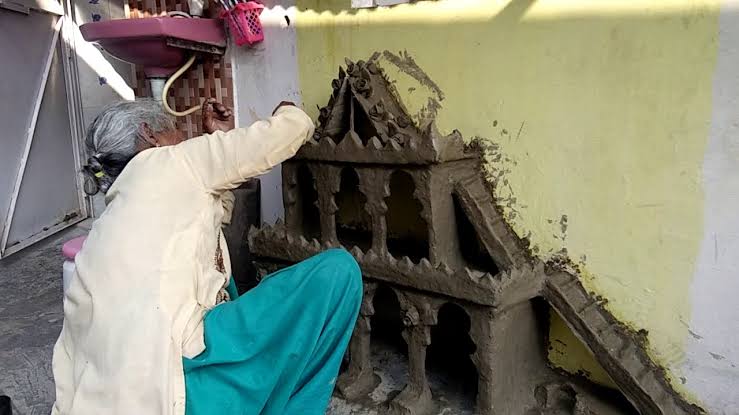 Civilization has come a long way. We are now in the 21st century. Our streets remain flooded with lights the whole year across the world. Electricity changed the way we interacted with nature. Night and day transition has become slicker. Our phone by switching itself to dark mode reminds us about the transition that has been outside our 10 by 10 room. In this new world, is Diwali more relevant? Hold on! Across the length of this write-up, you will find many unexplored aspects of Diwali.

In Bihar, the festival is indeed in its correct essence. The mothers in Bihar wait for their sons as Ayodhya waited for Rama; married women wait for their husbands as Urmila did for Lakshman. But this is the 21st century and to cater to the demand, many Pushpak Vimanas airplanes) and railways work very tirelessly. For every native of Bihar residing in different parts of the world, getting leave for one week either by hook or crook becomes a must as Diwali is immediately followed by Chhath Pooja. But homecoming is not that easy on the professional grounds and inefficiency of public transport in India.

Diwali technically was “Deepavali” or “Deepotsav”. With time “deep” (earthen lamps) found it hard to make adjustments within” Digital India”. In Banaras or Kashi every year, 10 lakhs of “deep” are lit on the sacred banks of the river Ganges to celebrate the Diwali of its kind- Dev Deepavali. Dev Deepavali unlike Deepavali is celebrated on Kartik Poornima (The full moon of Kartik Month, Shukl Paksha of the Hindu Calendar). Deepawali on the other hand is a five-day celebration, observed every year in early autumn after the conclusion of the summer harvest. It coincides with the new moon Amavasyaa) and is deemed the darkest night of the Hindu lunisolar calendar. The festivities begin two days beforeAmavasyaa, on Dhanteras, and extend two days after, on the second day of the month of Kartik. So two types of Diwali, oneofn the darkest night and the other full moon gives us the conclusion that Diwali has bigger dimensions that stays away from the many in our generation. Deepavali has to do with earthen lamps, but it was not just concerned with the darkness.

The scientific temperament of Deepavali

Let me give you one more observation. We are in the second half of October. Our days are getting shorter. Days demand fans and nights are appealing for light blankets. The celebration in the time of autumn makes this festival distinct. Our philosophy strengthens us even in tough times. When the whole northern hemisphere is slowing down, we are here to cheer the change. Sweets and dry fruits are symbols of introducing changes in food habits to cope with environmental changes.

Deepavali as a Binding force

India has always been a society of caste hierarchy. Festivals serve the need of unifying diverse castes in India. I remember those days of my childhood in Bihar when I was able to feel this unifying tendency of our festivals. The caste hierarchy was to distribute the work among different sections to ease the working efficiency, but it lost its glory with moral corruption. On Deepavali, our grandmother used to command us to visit the potters to arrange the earthen lamps, gharaunda (replica house made of clay) and a few more things. Brahmins, washerwomen and barbers and other craftsmen were invited to be a part of our celebrations. Deepawali as reflected in our folks was the coming of all members of a society to welcome Prince Ramaofn Ayodhya. The message remains simple. Deepavali is the coming together of various divisions among mortals.

Cultural Shifts In Deepavali
From family to social media, Deepavali has gained mass popularity across the globe. Today our Instagram and other social media accounts find tons of posts on how people interpret and follow the customs and rituals of the festival. Deepavali in the 21st century has become the exchange off-season papdi and forwarding greetings via the Internet, but it was never the same. Deepavali assigned roles to societies and also to individuals and families. Children making Rangoli and Gharaunda had deeper meanings. Parents were busy with making the house clean and working on necessary arrangements for rituals. For grandparents, it was wearing their best attire, meeting their age groups and gossiping. Rangoli made by sisters and assisted by the brothers was to welcome the deity Lakshmi in their potential followed by parents worshipping idols of Lord Ganesh And Goddess Lakshmi. Gharaunda was significant in getting through the efforts that go into making a house bliss. Today, Diwali starts with an image of a house flooded with lights and ends with a portrait clicked for someone in their best attire.

From Gharaunda to Artificial World
Children decorating Gharaunda symbolized their role in making a house prosperous and comfortable space. According to some folks, Gharaunda is a pure expression of affection between brothers and sisters. Gharaunda, a few years ago, used to be very singular in design as it was crafted by children themselves. They used natural resources such as bamboo, and clay to make the basic replica. The Gharaunda was decorated with beautiful colors and flowers. As an offering, Kheel Batasha (food types) etc. were kept in Gharaunda. This act conveyed that the house remains prosperous and full of resources.
Gharaunda, Chukka and Kulhiya were integral parts of our childhood, but they are fading away in our new generation.

In the end, I must say you will now find it cool to pronounce Deepavali, a few syllables will no longer be stressful for the vocal organs. Roots and legs may not be beautiful, but they are a must, isn’t it-? Let the Deepavali be multidimensional. Let it be the coming together of societies. Let this be a chance to know the person living in the same apartment. Let this be an evening of all family members at the dining table at the same time.

Adarsh Pandey was born in Saran, Bihar and currently lives in Patna. His writings are focussed on socio-economic issues of Bihar.