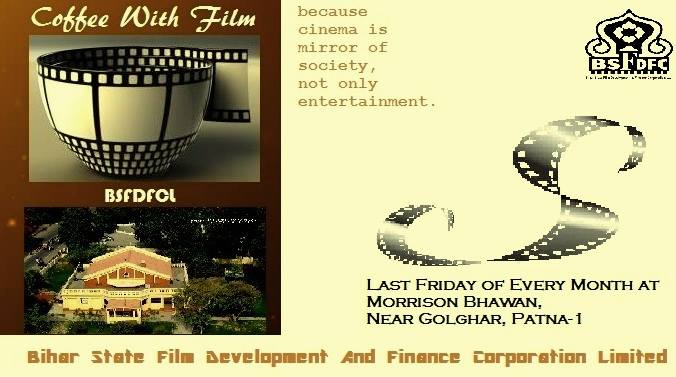 Patna: After the success of its first ‘Coffee With Film’ event held on May 27 and attended by around 100 cine lovers, Bihar State Film Division and Finance Corporation (BSFDFC) has decided to add more features to the ‘Film Club’ which organized this event. This club is located at Morrison Bhawan near the divisional commissioner’s office in Patna.

The aim behind this ‘Film Club’ in the state capital is to provide a place to city residents where they could sit, watch a film and then discuss it. Everyone should get an opportunity to watch a good film at low cost. As of now, we are focusing on the state capital, but our aim is to reach each and every village of Bihar and provide people with such infotainment.
-Ganga Kumar, BSFDFC managing director.

The concept behind ‘Coffee with Film’ is to screen those films which are of international repute or are related to Bihar, but could not make to the big screen. This event ‘Coffee with Film’ would now be organized on last Friday of every month, said Raviraj Patel, adviser to BSFDFC. He said apart from screening film once a month, another event named ‘Cine Samvad’ would also be organized every second Friday of each month.
The upcoming ‘Cine Samvad’ would be held on June 10 and the lecture’s topic would be ‘Regional cinema and film society’ for which Amitava Ghosh, a cine promoter from Jharkhand, has been invited. As of now, BSFDFC is not charging any fee to participate in ‘Coffee With Film’ or ‘Cine Samvad’, but by July end, annual membership fee would be taken.

This is just the beginning, so we are not charging anything. But by July end we will announce certain membership fee, which would be nominal so that people can afford it. We are also coming up with a canteen on the campus where snacks and coffee would be available to people. Besides, we are also renovating the library and upgrading it with more books on film making, magazines and newspapers. We are also upgrading our digital library with huge collection of films.
-Ashish Kumar, associated with the Film Club.

The film screening would be done in open air at 6.30pm on last Friday of every month. One hour before that, a discussion would be held. The time would change in winter and during rain it would be screened inside the club. “We are also working on another concept called ‘film on demand’, where people can book the club for their closed circle through any of the club member and watch the film of their choice by paying some nominal fee,
-Raviraj Patel