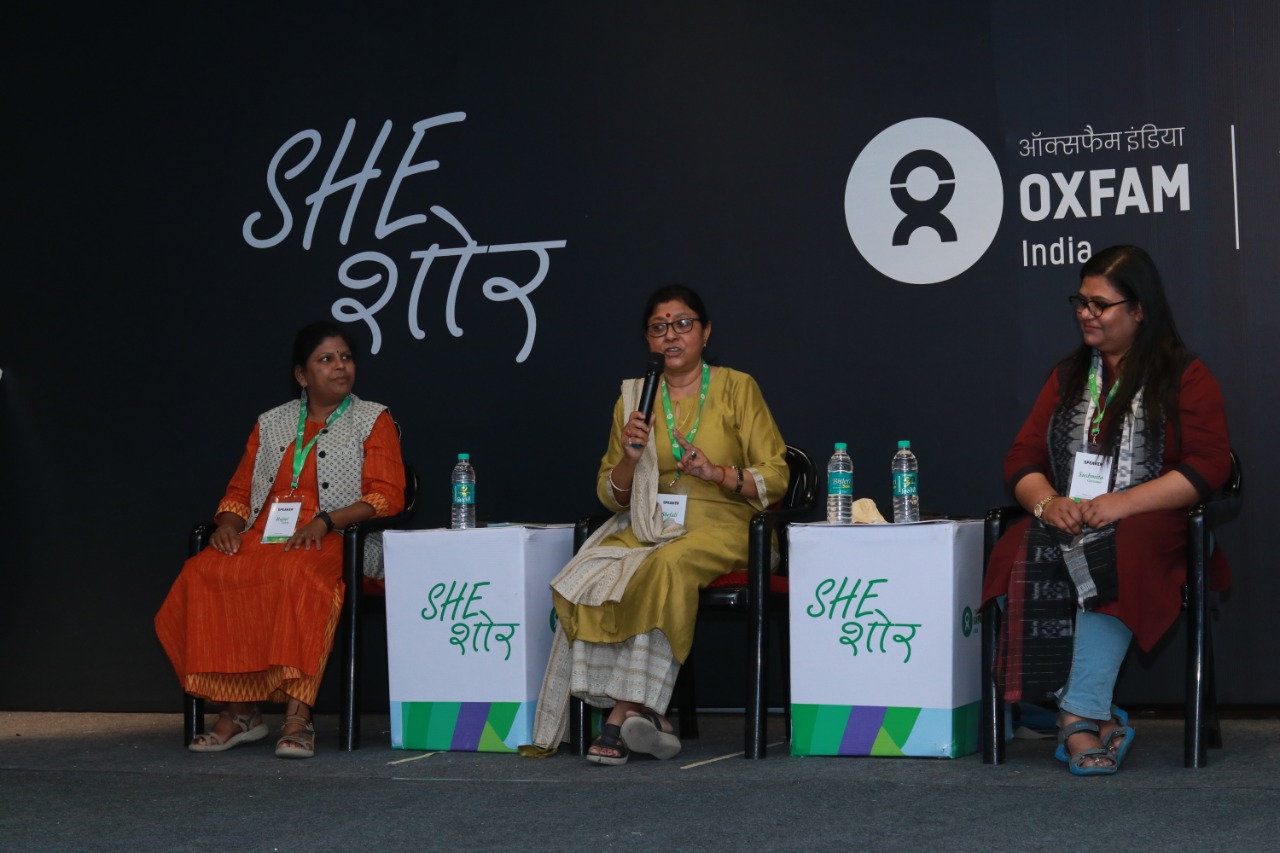 ‘She Shor’, organized by OXFAM India, was the campaign dedicated to International Women’s Day, which ran throughout the week from March 5 to March 11.

As part of the campaign, an event named ‘She Shor was organized on March 7 in Shri Krishna Vigyan Kendra.

The campaign was aimed to aware and involve people in Patna in the discourse around gender related issues. From discussing gender inequalities to celebrating the women achievers from Bihar, it worked towards empowering women. Discussions were held on topics including Domestic violence, social norms around marriage and the problems behind deciding the age of marriage for girls. With a intend to indulge people from all walks of life, the campaign asked known faces from Bihar to challenge the gendered issues.

The event provided a platform for Women achievers from Bihar to share their journey of success.

Usha Jha, President of Mahila Udyog Sangh, shared the story behind her success recounting it from her childhood days.

Sarita rai, Education activist and founder of ‘Topper Study Point – The Udaan’ which provides free education in four districts of Bihar, shred her journey behind the initiative.

Ankita Raj, an artist, though a live painting she conveyed the message that ‘Women can say NO for anything she wants without hesitation.’

Amrita Singh, social entrepreneur, and founder of Nav Astitva Foundation, an NGO pioneer in providing sanitary napkins in villages at nominal prices and opening sanitary vending machines in public areas in Patna. She shared about the social hurdles she faced while working for the cause.

Following the Women Achievers talk, there was a discussion by

Rajani Sahay, Executive Director of Sahyogi, NGO, talked about domestic violence and introspected the reason leading to the cause. She shared the woes of rural women during the pandemic and her experience of working with the survivors of Domestic violence. She highlights the role of the market in discriminating between genders. She hopes better social culture from coming generations.

Shefali Roy, Head of Department of Political science, Patna University talked about the social norms around marriage. With excerpts from her personal life, she critically broke down the patriarchal traditions and rituals around marriage, for the audience. Highlighting the importance of marriage, she explained ways to stay in a healthy marriage. Sharing a personal incident, she talked about the mindset of people on Feminism.

Sushmita Goswami, Project head for Gender justice, Oxfam India, shared the history behind March 8 being recognized as International Women’s Day. She talked about the role of the state in deciding the age of marriage for girls and its consequences. Suggesting ways for working towards the benefit of women, she also urged the audience for active participation in the day-to-day gender-related issues.

Padma Shree awardee Sudha Varghese felicitated the Panel members and Women Achievers. She also addressed the audience with her speech on the rights of marginalized women.

She Shor was concluded with a ‘Musical tribute’ to women by Rahul and Harish from the Community Jamming organization.

Suprabhat Raj, college student, says” the key takeaway was Shefali Roy’s talk on the equal
importance of both He and She.”